This Is Destroying Your Wealth 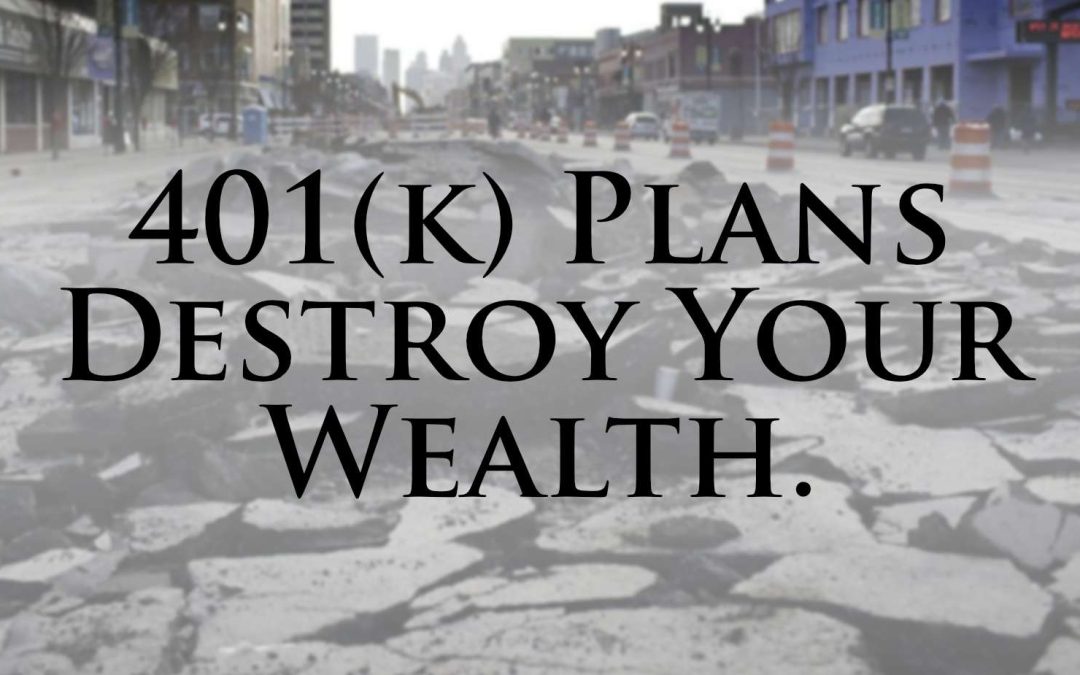 Would you like to retire on $1.8 million thirty years from now?

After 25% tax and 3% inflation, you’d be left with just $556K. That doesn’t even include the drags of fees, emotion and volatility.

Plus you’ve probably made tremendous sacrifices for thirty years.

What would $556K provide for you after all of this?

This is why most 401(k) plan participants set themselves up for something between disappointment and destitution.

The thing is … they don’t realize it until they’re older and it’s too late.

In fact, they have paid double the tax rate than if they had just invested outside their 401(k) plan, as I explain in the video below.

Delayed gratification has some merit early in your life. But it’s overrated.

Actually, both real estate investors and 401(k) contributors delay some gratification; the former for the property down payment, the latter in the salary reduction.

Real estate investors get paid back right away with monthly cash flow.

401(k) contributors don’t get the benefit of the cash flow until late in life. They delay gratification for decades.

Why would one invest only for the distant future? They could have invested for a benefit both now and in the future.

This even creates some big existential questions about what your own life means to you.

I break down some hard truths in this video, backed up with startling real world numbers. Watch here or click below:

There was a time when I lived a day-job-workin’ life inside a blue cubicle for my state’s Department of Transportation.

Back then, I contributed to my employer’s 401(k) plan because I thought it was the smartest investment vehicle.

Convincing me otherwise was not easy.

And because my peer group often discussed their 401(k) investments, they constantly added brushstrokes to this canvas of normalcy.

Many said: “It’s just what everyone does” and there’s “nothing better”.

I saw that MBAs and better-educated people often “maxxed out” their 401(k)s. This helped reinforce the notion that participation was wise.

But with more self-education, I soon realized that “exceptional” decisions are antithetical to “normal”.

These “smart people” never had a financial education at all.

Many employees believe things only because they’ve … well … believed them for a long time, not because they are true.

They focus on how “work works”, not on how “money works”. Yet money is the main reason that they go to work!

Mark Twain said: “Whenever you find yourself on the side of the majority, it is time to pause and reflect.”

The first few times I read that 401(k)s are poor investment vehicles, I did not want to believe it.

Though the rationale made sense, it seemed too inconvenient to change my thoughts.

Because, in turn, that could lead to having to change my actions.

I might even have to leave my comfort zone.

Everyone gets lulled into doing the easy thing and allowing those direct paycheck deductions for 401(k) contributions.

Another reason that I think people stay in the plans is that they simply don’t know about an alternative.

… the ultimate validation came later from the actual man that invented the 401(k) plan, Ted Benna, when he was my guest on GRE Podcast Episode 197 (here).

He corroborated much of my analysis that I make in the above video.

Benna even laments that he created a “monster” that should be “blown up” (here).

Further, Ted Benna himself is an active real estate investor!

He & I even discussed how when 401(k)s were first rolled out forty years ago, they were called “Salary Reduction Plans”.

Sheesh! They soon had to scrap that ominous name in order to foster participation.

But they still reduce your salary just the same! The plan didn’t change. Only the name changed to today’s more genteel-sounding “Defined Contribution Plan”.

This is nearly as simple as I can make it:

Weigh the benefit of tax deferral versus the cost of life deferral.

One can run myriad scenarios, replete with: future inflation calculators, dollar cost averaging, how fees erode compounding, discounted future cash flows, and even actuarial life tables all that they want to.

After all that, I ultimately tore down my 401(k) from one simple truth that I kept telling myself:

This “plan” has zero chance of improving life until my 60s and 70s.

You can’t make any money from the property that you don’t own. Just copy me and buy where I buy. Get pre-qualified for a mortgage loan and find property through GREturnkey.com